Harding has occupied a position that enables him to obtain information regarding the disbandment of the army. Wants clarification on the General Orders No 83 because these orders, according to our officers' understanding, limit its operation to those who enlisted prior to 1 October 1862. Writes that the "effect of this is to retain in the service all the volunteers who enlisted under the 300,000 call of 1862 after 1 October." States that the company he belongs to is principally composed of men who enlisted between 1 September and 31 October 1862; they were not mustered into the service until 13 January 1863. Since he joined the company before it reached 40 men and their company was mustered in at the same time that the September enlistments were, he feels that he is entitled to his discharge as one of the originals. Says that next time he sees Harding, he will tell Harding a tale that will make each particular hair stand up. Asks Harding to send him the very latest orders from the War Department. 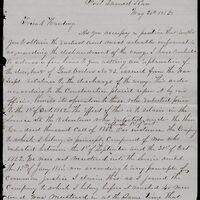 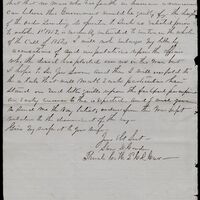