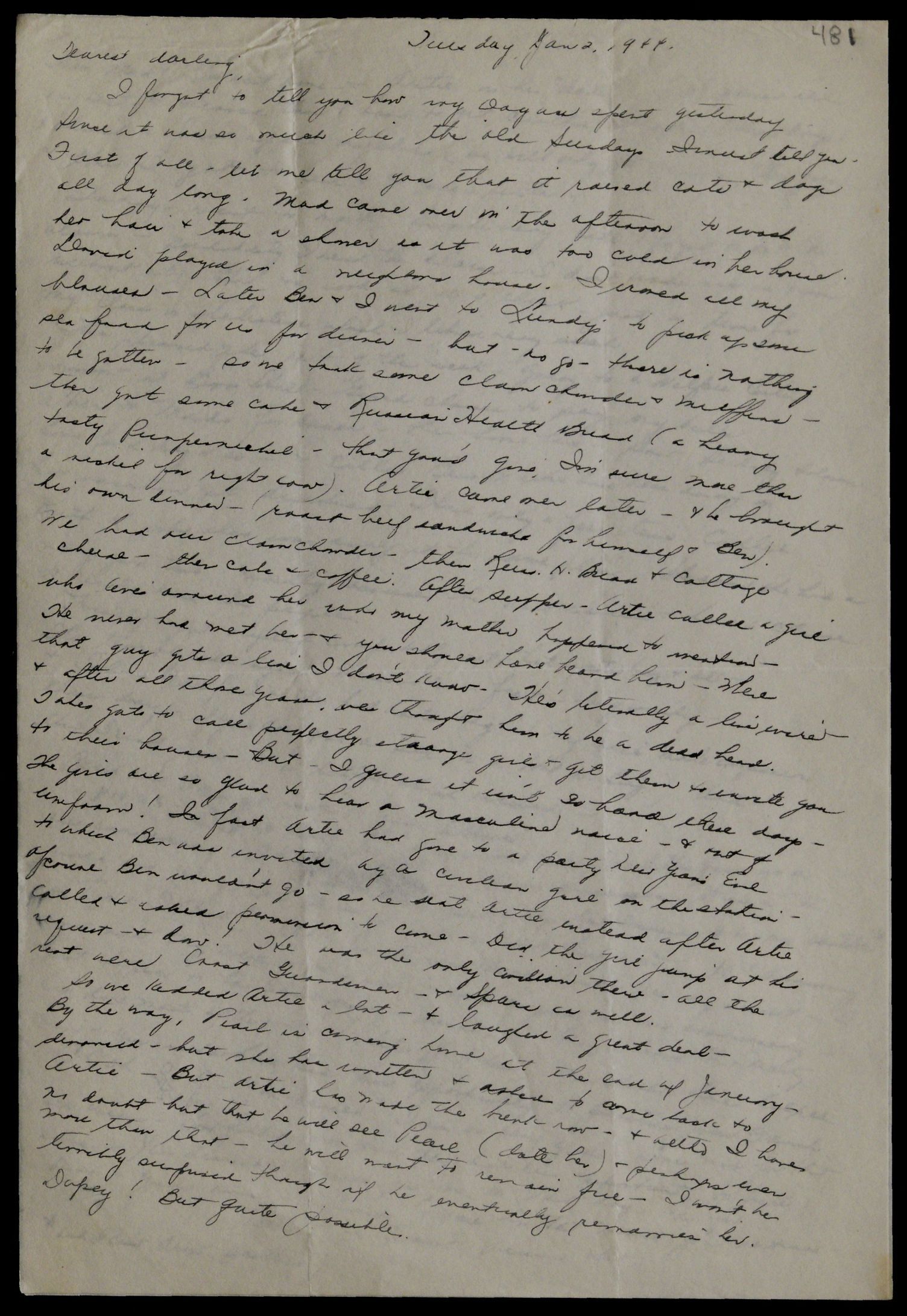 I forgot to tell you how my Day was spent yesterday Since it was so much like the old Sundays I must tell you -- First of all - let me tell you that it rained cats & dogs all day long. Mad came over in the afternoon to wash her hair& take a shower as it was too cold in her house. David played in a neighbors house. I ironed all my blouses - Later Ben & I went to Lundy's to pick up some sea food for us for dinner - but - no-go -- there is nothing to be gotten - so we took some clam chowder & muffins - then got some cake & Russian Health Bread ( a heavy tasty pumpernickel - that you'd give, I'm sure more than a nickel for right now). Artie came over later - & he brought his own dinner - roast beef sandwiches for himself & Ben). We had our clam chowder - then Russ. H. Bread & cottage cheese - then cake & coffee. After supper - Artie called a girl who lives around here who my mother happened to mention - He never had met her - & you should have heard him - Where that guy gets a line I don't know - He's literally a live wire - & after all those years, we thought him to be a dead head. Takes guts to call perfectly strange girls & get them to invite you to their houses - But - I guess it isn't so hard these days - The girls are so glad to hear a masculine voice - & out of uniform! In fact Artie had gone to a party New Year's Eve to which Ben was invited by a civilian girl on the station - of course Ben wouldn't go - so he sent Artie instead after Artie called & asked permission to come - Did the girl jump at his request - & how! He was the only civilian there - all the rest were Coast Guardsmen - & Spurs as well.

So we kidded Artie a lot - & laughed a great deal - By the way, Pearl is coming home at the end of January - divorced - but she has written & asked to come back to Artie - But Artie has made the break now - & altho I have no doubt but that he will see Pearl ( date her) & perhaps even more than that - he will want to remain free - I won't be terribly surprised though if he eventually remarries her. Dopey! But quite possible.